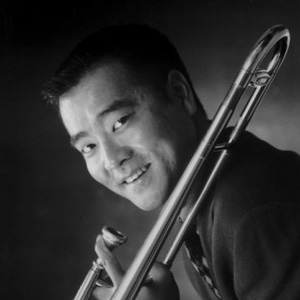 Brad Shigeta moved to New York City in the Fall of 1990 via Montreal.

This led to many international and national tours as well as recordings and film scores with the Illinois Jacquet Big Band, the Dave Holland Big Band, the Lincoln Center Jazz Orchestra, Vince Giordano and the Nighthawks and the Duke Ellington Orchestra under the direction of Mercer Ellington.

He currently can be heard re-creating Jack Jenny and Jack Teagarden solos on the soundtrack for Martin Scorcese’s blockbuster movie: “The Aviator” in the fall of 2004, as well as on the newly released CD of swing standards by Danny Aiello.

In the past few years, Brad has been able to return to the roots and the music that originally attracted him to become a musician: Traditional and Swing music. He is currently in a Duke Ellington alumni small group under the direction of Barrie Lee Hall, as well as a regular member of Vince Giordano’s Nighthawks (music of the 10’s, 20’s), John Gill’s Jazz Kings (traditional New Orleans music) and the Manhattan Ragtime Orchestra in New York City.